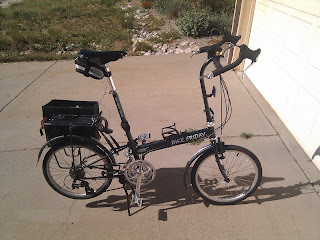 I got my Bike Friday New World Tourist a couple weeks ago and just now got around to taking a photo. Riding the bike, it turns out, is much more fun than taking pictures of it.

This is the bike I got to replace my custom-fitted cooler than snot touring bike; the one I forgot was on top of the car when I pulled into the garage last winter. It feels like home again after being on my 1980s ALAN racing bike for the last 7 or so months; the difference is that this bike is geared really low. I may have to move the 52-tooth chainring into the center, and put something truly giant on the outside. On the other hand, I haven't yet run out of gears, and my inner cheapskate is inclined to leave well enough alone. I might be able to haul a Corolla with this crazy low gearing.

I've been riding home every day from my job downtown, and one of the side effects of the more upright handlebars and lower gearing is that I'm no longer going as fast as I possibly can. This has made my ride really nice. If you haven't tried riding slowly, I highly recommend it. I'm probably only losing a minute or two on my commute. No riding today though, I'm too hung over from the Benadryl I took last night.

My wife and I took our Fridays down to Albuquerque last weekend, and rode from Bernalillo to UNM. Parts of our ride were along the route for the Albuquerque Century, and just about everybody we met up with wanted to know about the folding bikes we had: I think I folded and unfolded mine at least 5 times, just demonstrating. We rode the train back and answered another couple of queries about the bikes. Don't get a folder if you dislike talking to people!
Posted by Unknown at 3:54 PM 6 comments:

Black Hawk, CO Bans Bikes from Most Streets in town 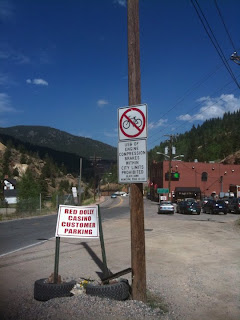 Given that Black Hawk, Colorado is right on the route between the Peak to Peak Highway and Central City Parkway...

(With apologies to the late Warren Zevon)
Click on the pic to be directed to BicycleColorado.org's coverage of this story.

Wow. Lucky we live here. Let's keep Los Alamos a bicycling-friendly community! Not to mention, we wouldn't want to lose any Federal Funds. The city of Black Hawk, CO just banned the riding of bikes from just about all the streets in their city. Here is a discussion by Simon MacMichael in Road CC. And if you think this is an isolated case of reactionary behavior in some blighted backwater, check this out: its been tried elsewhere, too.

I posted some related rumblings a few weeks ago about cyclists needing to protect their rights. One way is through high standards of riding. The other way is to have a few good lawyers around to help write non-discriminatory laws and defend against bad ones like this. The bike industry should be writing the checks.
The League of American Bicyclists has a blog set up on the Black Hawk ban.

Of course, there is the Boycott Black Hawk movement.

But the late, wonderful songwriter Warren Zevon said it best: Send lawyers, guns, and money. Modern politics responds to power and money, and not much else.
Posted by Khal at 9:17 AM 1 comment:

Do not spindle or mutilate. Feel free to fold. 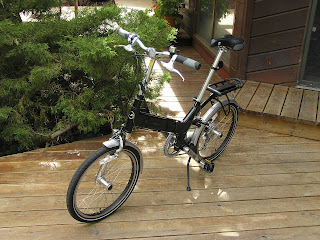 Attending the 2010 League of American Bicyclists National Rally in Albuquerque turned out to be a pretty good deal. In addition to the rides, the train ride back from Belen, being able to touch base with old friends and fellow advocates, and having an excuse to get outa Dodge for a few days, Meena and I bought a couple raffle tickets for a folding bike. Lo and behold, when the winning numbers were drawn at the Saturday banquet, we ended up bringing home a Giant Halfway. Now, we just have to find time to ride one more bike! Many thanks to the folks at The Kickstand of Albuquerque for donating the bike for the raffle. And you really can fold that puppy up inside of fifteen seconds.

The League posthumously presented the Phyllis Harmon Volunteer of the Year award to Gail Ryba. The award was accepted by Tom Robey. It was a pretty moving experience. I've got some further mutterings about this, but I'll save my LA Bike colleagues the pain and suffering of reading them and post them here instead.
Posted by Khal at 5:41 PM 4 comments: