League of American Bicyclists: Enforcement No Longer One of the E's

I was wandering through the League of American Bicyclists web pages the other day looking to see if the little fall newsletter was there as a pdf file. In the process, I found this article:

Pedaling Toward a More Just BFA Program: Removing “Enforcement” from our Framework

Bicycle Friendly America
Equity
by Amelia Neptune
"As of this week, the League of American Bicyclists has officially and permanently removed ‘Enforcement’ as one of the pillars of the Bicycle Friendly America program’s ‘5 E’ framework."
I sent this email to Bill Nesper and Ken McLeod
"Of course (in the process of looking for something else), I got to reading other stuff, including the League of American Bicyclists decision removing Enforcement from the E's. I have mixed thoughts on that, having seen the good, the bad, and the ugly. I have read Radly Balco and other authors who point out the problems with racial disparities and prejudice in enforcement, policing for profit and how that targets marginalized communities, and of course the grotesque happenings of this year. Clearly, enforcement has not been seeing, as Churchill would say, its finest hour.

Enforcement pales in comparison to planning and design in controlling traffic and traveling safety, as we in the League and folks like Strong Town's Chuck Marohn (copied) have pointed out with regards to designing roadway systems that beg to be misused and then railing at their misuse. It makes no sense, for example, to bring St. Francis Drive into north Santa Fe as a freeway and then rail at speeding. Well, the road begs to be used to speed.

But accountability matters. If we are squeamish about enforcement, we cannot be squeamish about holding both government and individuals accountable for their behavior. It must be done in a just and equitable way. My concern with your ideas about automated "enforcement" is that in most cities, automated enforcement goes over like a lead balloon. Often, private companies are tasked with camera enforcement and this reeks again of policing for profit. 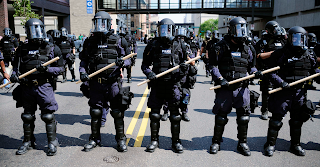 Some afterthoughts. This is a contentious issue and part of a far bigger civil rights issue than bicycling alone but since the League promotes cycling, we are talking about injustice related to bicycling/walking.  If I were a Black or Latino kid in a city I'd probably write something different but that's just a reason for others to write about it too and the faces on the League Board and Staff certainly look more diverse than in previous decades. The high profile police misconduct we saw in incidents such the police killing of George Floyd, the rise of the Warrior Cop mentality, and the countless incidents of using police as revenue generators (which led in a straight line to the death of Philando Castile) have done enormous damage to police-civilian relationships and have put a dark pall of racism and violence over "enforcement".
Even if we redesign every road in America to Vision Zero standards, promote infill rather than stroad-worshipping sprawl, provide great connectivity for biking and walking, and ensure every inner city and every suburban "arterial and cul de sac" kid has a safe bike route to school and play (not to mention, good schools and playgrounds), there has to be accountability if we are to have both equity and safety for bicycling and walking. For example, anyone walking the streets of Santa Fe can see that its almost as common to see motorists with cell phones as steering wheels in their hands.
Finding ways of ultimately holding communities accountable for bad design as well as class based or racist policies, and holding accountable individual bad behavior cannot be overlooked, even if we take whiteout to one of the E's. The question is, how do we put the justice word back into the criminal justice system so everyone thinks they are covered by justice rather than having a knee on their neck, choking the life not only out of the individual but out of the community?
Interestingly, the Albuquerque Journal just weighed in on enforcement: Editorial: Its time for the APD to put the brakes on street racing.
And for every story like that there is one like this:

The Times identified 16 cases since 2005 where a stop for bike violations in Los Angeles County resulted in a police shooting, according to interviews and a review of public records from the district attorney, coroner and various court cases. Most of the stops occurred in communities made up largely of Black and Latino residents. In 11 incidents, including Kizzee’s, the bicyclists — all male and Black or Latino — were killed.
Send your thoughts to the League on this. All this ugliness aside, who you gonna call when some speeding, texting meathead runs you down? A social worker? 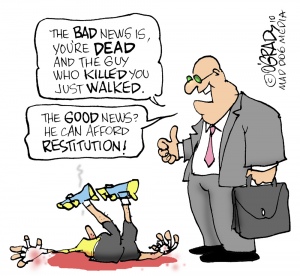 This cartoon was a result of this story:
The Explainer: Is having a Mercedes an affirmative defense?
Posted by Khal at 1:37 PM 4 comments:

A New Entrance to the La Tierra Trails, But Please Don't Be an Asshole

As I was heading to the Tierra Trails this afternoon for a quick bit of mental health therapy on the mountain bike, I noticed a new bit of trail that connects to La Tierra trails from just to the west of the Frank Ortiz Dog Park. Riding west from the city and past the dog park on Camino de las Crucitas, just about fifty or so feet before you are about to veer right onto Buckman Road, there is a small trailhead that cuts to the right and marked by a white signpost. That small trail alleviates the need to ride on the roads until you get to the trail entrances on Camino de las Montoyas. The trail wanders hither and yon with some serious whoop de dos until you get to the trail crossing onto the concrete trailhead just to the east of the NM 599 intersection. Chapeau to the trail builders and I suspect Tim Rogers had something to do with this. 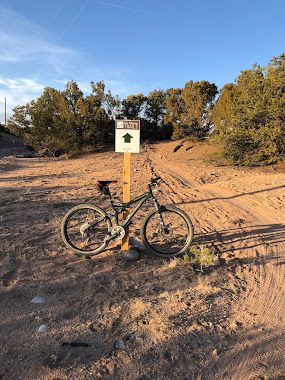 Trailhead sign to your right as you are riding west on Camino de las Crucitas, just past the dog park parking lot entrance on Crucitas and about fifty feet before the Buckman Road turn.

That all said, it is busy out there. I ran into about a dozen cyclists in my seven mile dirt circuit, which is a lot for me to run into on a weekday. One almost ran me over as I stopped to yield the trail to a couple walking their dog. So please, as Miss Manners in the Cycling Independent reminds us, don't be an asshole out there. The hospitals are full enough already and you don't need to add to the gang needing a bed. A lot of people are out trying to get some air, mental health, and exercise during this lockdown and we need to respect each other's space. Bottom line, be careful and courteous out there, leave a little more room for error, and save the "hold my beer" stunts for next year.

Indeed, the new bit of trail is narrow, with few places to yield, and a tad technical in places. I nearly had a kiss and tell moment tonight (Friday) with two oncoming riders but fortunately, we were all holding some speed back to account for oncoming traffic. Be careful and considerate out there.

Somehow sprained my back yesterday and this morning was no fun, but that's no excuse acceptable to the dog for not walking her. 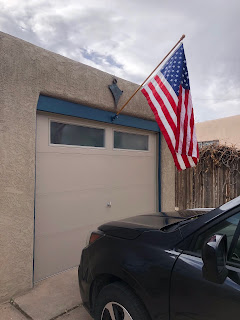 First order of business was screw in the flagpole mount and raise Old Glory to honor those who served. Uncles Ralph and Roy who served in SE Asia and Europe, respectively, John Zeh Jr, my first wife's dad, who landed in Normandy on D+3, friends like RPD Officer Fred "Woody" Woodard who served in the 101st Airborne and had his fill of war in places like Bastogne, Pat O'Brien and Tore Knos who fought in the Vietnam War, Col. Harold O'Grady, who won a DFC flying transports out of New Guinea in the Pacific Theatre, and so many others. A moment of silence to honor those who returned, those who didn't make it back, and those who came back but whose internal wars never ended. 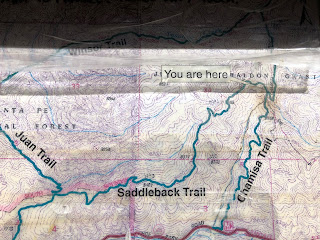 The turnaround for the hike for today was at the confluence of the Saddleback and Chamisa Trails, a very pretty saddle at about 8400 feet elevation. I thought of going on to Windsor but with the back not happy, felt it was wise to stop at the first junction. 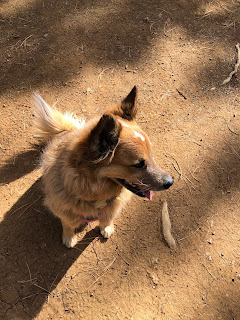 Annie, of course, was happy to get out of the house and romp in the mountains. 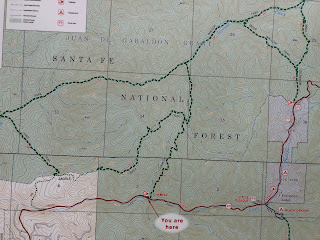 The start and finish, at the Hyde Park pulloff, is at about 7800 feet altitude. So about 600 feet of climbing. A lovely day all in all, and my back even felt a lot better after bumbling along over hill and dale. Hope all of you had a pleasant and Covid-free day! 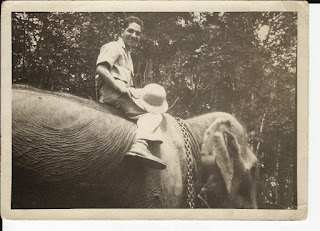 My mom's oldest brother, Ralph Bonati, during a lighter moment in SE Asia, where he was an aide to Gen. Raymond Wheeler. Uncle Roy Bonati, second of the five kids, had tougher duty, dodging German 88's on the way through France and Germany in a railway reconstruction battalion. Roy told me that his railroad job didn't insulate them from incoming fire.

On the Anniversary of D-Day: Making World War II Personal