Bike and Biker Day at the Capitol


The Saturday rally was a good one. We had a decent turnout of folks from the lycra crowd and got a lot of recognition from the moto crowd. Recent crash victim and bike pro Irena Ossola of Santa Fe gave a compelling talk, after an intro from Jennifer Buntz (Duke City Wheelmen). Ann Overstreet (BikeABQ) and Diane Albert were recognized for making the food possible and Tony Farrar, owner of NM Bike N Sport, sponsored us as his shop is a great location to meet and then easily, for non-Fanta Seans, get to the Capitol as well as the Railyard. The moto crowd was sponsored and fed by Santa Fe Harley-Davidson.

I'm having trouble typing as I speared my left index finger while spazzing at something, and keep making mistakes. Have a great day.
Posted by Khal at 9:35 AM 2 comments:

God speed the plow.... By this wonderful provision, which is only man's mastery over nature, the clouds are dispensing copious rains ... [the plow] is the instrument which separates civilization from savagery; and converts a desert into a farm or garden.... To be more concise, Rain follows the plow.
--Charles Dana Wilber

Since this blog bounces between bicycling for fun to more serious issues such as transportation, health, and climate, I thought I would toss this out in the interest of sustainability issues.

Yesterday the Albuquerque Journal said that "Drought Returns to New Mexico". I would argue it never left. Drought has various definitions and understandings and can be defined on different time scales depending on one's frame of reference (agriculture, climatology, ecology, etc.); it generally means "golly, we are getting less moisture than we have come to expect based on our limited experiences". I tend to think of it in climate cycles, because climate tells us what variations we can expect. As civilizations, we have to manage our societies in light of that expectation. Rain does not follow the plow.

That said, there may be a modern variation to that theme of rain vs. plow that has a lot of credibility: climate change follows the smokestack.

So in the interest of trying to understand what is going on lately as far as that wet stuff that falls from the sky, here are two graphs from a John Fleck article in a 2012 issue of the Albuquerque Journal. Just looking at a century, there appear to be both short (a few years) and longer term (about half a century) cycles.  This is not meant as a prediction or alarm bell, but two things. We can, of course, expect short term El Nino/La Nina/ENSO cycles that mean snowpack/rainfall differences on the year to year basis. We can also expect, if this trend is not an aberration (see tree ring data below), longer term cyclicity in water feast and famine due to physical processes such as the Pacific Decadal Oscillation and other processes, sometimes coupled or that may be teleconnected, such as the PDO and AMO. Note also that if winter precipitation decreases while temperatures increase, this is a double whammy. Snowpack may not last as long due to increased early melting and sublimation. We may see higher transpiration rates in trees that may not be sustainable. Plus, insects such as bark beetles may rev their biological engines faster.

Here is that century long record of precipitation and temperature variation in New Mexico, from John Fleck's 2012 article. 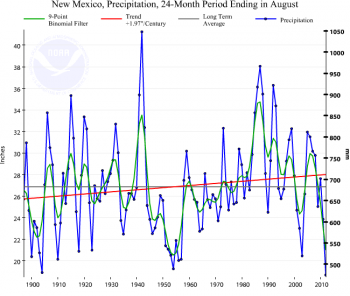 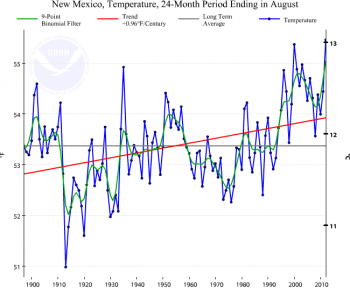 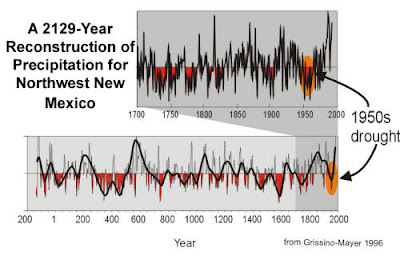 Since I have a January birthday and since today was supposed to be warmer than the next couple weeks, I took advantage of the opportunity to do the old "ride my age in km". Even got in a couple extra km to bank for next year. The best news is my right shoulder didn't bother me at all. On long rides last summer it reminded me, bluntly, of its recent major rebuild.

By doing the Loop de Loops through Pajarito Acres and La Senda, adding that to the Bandelier Loop distance, and starting and finishing on N. Mesa, I could pile up a little more than the 64 clicks I needed. 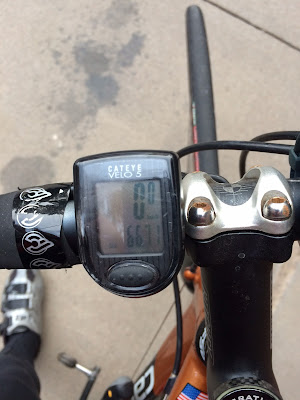 Bike Day is on! Please be there. Holler at me if you need any additional information. The idea is to promote safe and fun bicycling and motorcycling and to advocate for laws and policies designed for complete and safe streets for all of us. We may be discussing Irena Ossola's progress after being hit and seriously injured by an inattentive driver. Click on the jpeg for a full size copy of the flyer to view or download.

There will be some Santa Fe rides in advance and of course the gathering of the faithful at BikeNSport for pre-rally eats provided by BikeABQ and other advocacy organizations. Also, show up to memorialize the late Willard Chilcott, founder of the Santa Fe Century Ride, who just went on ride the Great Century Ride in the Sky. 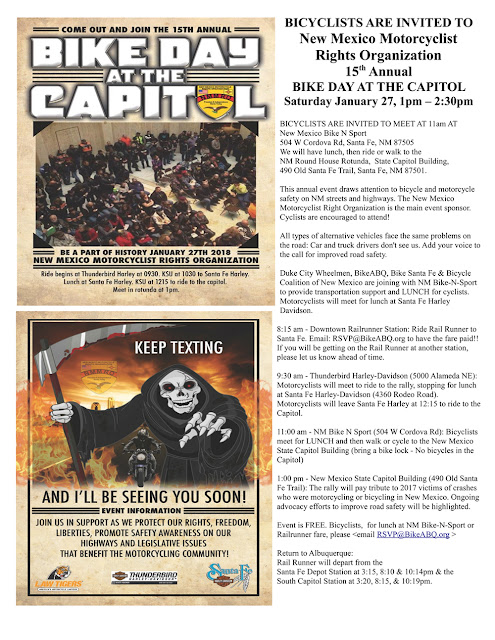 Happy New Year and Save This Date

Hopefully, 2018 will be a good year. I celebrated the new year with a long walk with my better half, a quick blast around Kwage Mesa with the Stumpjumper that is as obsolete as I am, and finally got rid of that ten year old picture of two guys in their better days that has been sitting on the masthead of this blog. But just to annoy you...

On another note, the annual Roundhouse Bike Rally will be on Saturday, 27 January. Come if you can and give me a holler if you have any questions. The moto crowd is rallying from Santa Fe Harley-Davidson. The human powered crowd is still getting our shit together. More to come. 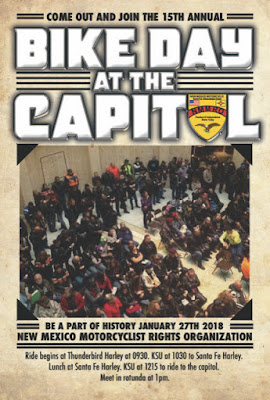