Sez it all. Thanks to Santa Fe New Mexican reporter Andrew Oxford for tweeting this out. 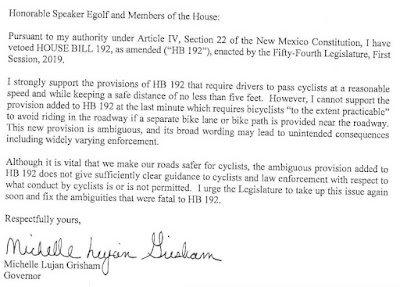 Maybe this picture explains the language in that veto letter. 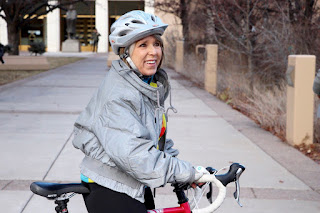 Will She or Won't She? HB 192 Remains to be Signed

And on that note, my conversation on KSFR during this morning's Wake Up Call With Tom Trowbridge.

Gov. Lujan-Grisham Signs Passing Bill, Declares All Roads Will Have Wide Bike Paths and Bikes Are Now King In NM

In a startling announcement that caught even the most optimistic bicycle planners and advocates off guard, Governor Michelle Lujan-Grisham not only signed HB 192 into law, but issued an executive order, to wit:

"Given that the amended bill asks bicyclists to ride on paths when they are available, I am issuing an Executive Order mandating that the New Mexico Dept. of Transportation will divert all roadway construction and maintenance funds in the state to the building of AASHTO compliant and safe bicycle paths that will traverse the state from north to south and east to west. No state highway funds or Federal pass-through funds will be spent on roads until the bicycle network is superior to that enjoyed by motorists. In New Mexico, bikes will henceforth be king!"

The Governor then signed the E.O. and left the Roundhouse on a Litespeed T1SL Dura-Ace.