City to Close Many Hike-Bike Trails Due To Fire Danger

Sigh. Just got this.

City to Close Select Trails Due to

While the trails and open spaces listed above are closed, the Mayor’s Proclamation encourages residents and visitors to utilize the City’s robust network of inner-city trails, open spaces, parks, and recreation centers.

Click here for a map of trails that remain accessible and suitable for biking, hiking, and dog-walking.

Why the title? Because I barely owned a bicycle while we lived in Buffalo. I got my first one just about the time my parents packed the house and moved out to a rural area where my stepdad grew up. I did shed the training wheels while we still lived in the Johnson Neighborhood, though. But most of us kids rode around on those little fruit box/roller skate scooters. That was cool.

I love it how the general White public just now notices the pain of being a Black Buffalo resident now that their sensitivities are offended by a racist mass murderer. I’ve seen some of his 180 page Replacement Theory based rant–yep, this was all about race.

I was a kid in that neighborhood. We lived over on Johnson Street, where my step-grandparents owned a home and worked at the old Rich’s Ice Cream factory. Nice blue collar jobs. I went to School #39 on High Street. Jefferson Ave, the big arterial where that now infamous Topps Market now sits up to the north, was about four blocks away. It was a bit of a rough neighborhood back then but solidly working class. My best friend, Michael, lived across the street. His dad was a city cop.

Buffalo has been on a downward, violent spiral since the sixties and not due to lunatic fringe racists but to good old fashioned mainstream values of neglect and segregation. I was back in Buffalo about five years ago to make a major donation to the Buffalo Museum of Science, the Bistany Telescope. As my wife said, the east side where I was a kid looked like a scene out of an apartheid city in old apartheid South Africa. The house I lived in was missing. It was arsoned decades ago. Empty lots are as common as homes.

Politics, economics, and policy control civil peace vs. violence although it's easy to focus on racists and guns. A century or more of racism and economic apartheid in Buffalo is why people disproportionately die young of violent lead poisoning in Buffalo, most of which is local on local crime.  Then an occasional racist shoots up the place and everyone notices. But sixty years of homes being torched, work moving overseas, white flight (including my parents) the legacy of racist urban planning such as how the Kensington Expressway was rammed through the old Black neighborhoods (it cut off my walk to school as well as the community’s access to Buffalo’s beautiful parks), and money moving to the rich…well, that’s business as usual. A slow moving economic pandemic goes unnoticed. East Buffalo is full of empty lots. The West Side (where I also lived for a little while) is full of multimillion dollar mansions being renovated and flipped. That’s the “Buffalo Renaissance”.

Strong Towns founder Charles Marohn, a PE and urban planner, made a very powerful case for reparations, looking at what redlining did to Kansas City. I suspect if one looked at the history of wealth distribution in Buffalo, one could ask whether past racism and its legacy effects have similarly made a case for redistribution in Buffalo. Most inner city violence is internal, this mass shooting being an exception. As a retired ER doctor I know, Dr. Jim Webster, recently opined, the only thing that stops a bullet is a good job. I might add good schools and social equity.

So while it is easy to focus on white supremacists, AR-15’s (the gunman’s was bought as NYS-legal and illegally modified) and terrorists being the root of all evil, it’s everyday American values of apartheid and neglect that have led to so many dying in Buffalo, not to mention other places. I actually think Critical Race Theory has a good point. To fix what is broken, we have to not just change out a few spark plugs on the economic and societal engine, but overhaul the whole concept of the society and the engine. Taking away the guns, as some politicians are once again demanding, will not take away the pain.

Santa Fe Bike Swap, May 15th. Save the Date!

The bike swap is back! Sunday May 15th, 9am to 12:30 pm
Bike Santa Fe is working with the Free Bikes 4 Kids program as a part of Bike Month.
It will be at the Solana Center, 905 West Alameda, Near Better Day Coffee.
See the attached flyer, below, for more details. 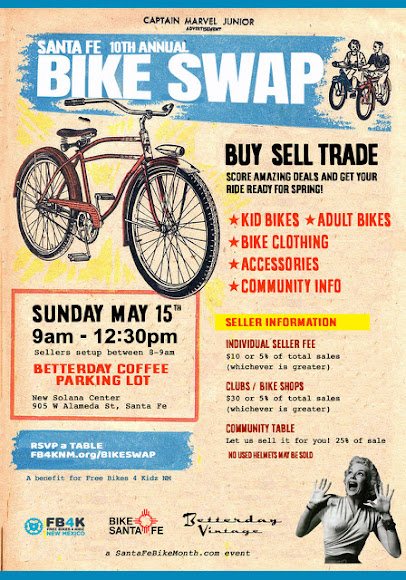