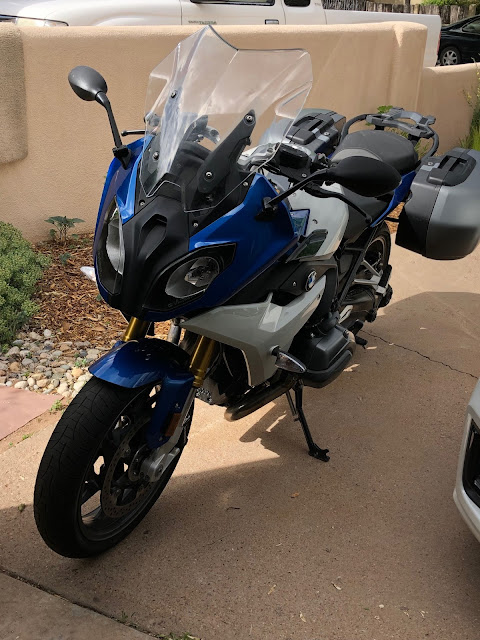 Patrick O'Grady from Albuquerque, Pat O'Brien from Tucson, and Pat's nephew Andy from Florida wandered up this way to do the Santa Fe Half Century today. Mind you, Andy lives at sea level and had been up at 7000 feet all of one day, after spending two days at Pat's home south of Tucson, which is bit lower than our nosebleed altitude here. But Andy started the fifty miler with yellow "Do Epic Shit" socks.

Climbing to the top of the climb on US 285 coming into El Dorado, I guess Andy asked Pat "is this epic shit?". I think for a first timer on his first long ride, doing it on no altitude training at 7k feet, yep, it qualifies.

Nice day, if a bit cold and windy. But it is, after all, spring in Northern NM. At least it didn't snow.

For those days when there is a lot else to do.

Start out in Casa Solana or DeVargas Mall. I crossed St. Francis on Camino de las Crucitas and got on Paseo de Peralta. Turn East on West San Francisco towards the center of Old Santa Fe. Turn right at the cathedral onto Cathedral Place. Turn left onto East Alameda. Head east along the Santa Fe River. Turn left onto Gonzales Rd. This is the only tough climb in this little loop. Turn Rt. on Hyde Park Road. Go about 100 ft and turn left onto the continuation of Gonzales Rd. Veer left staying on Gonzales and it will turn into Vallecita Drive. You can add what looks like a mile by turning rt. and taking Paseo del Sur on a loop to where it hits Vallecita (if you do this loop, you will turn rt onto Vallecita). In either case, follow Vallecita west. It zigzags and turns into Valley. Turn left at Valley and take it west to Bishop Lodge Rd. Turn right onto Bishop Lodge Rd. and take it to the Tesuque Village Market. Turn left onto Tesuque Village Rd. and head south back towards Santa Fe. Cross under the highway and turn left onto Opera Drive. Take that south. It will turn into Tano Rd. Follow Tano west-northwest. Turn left onto Camino de las Montoyas. Take Montoyas south across State Rt. 599--be careful when crossing 599 as it is a high speed divided highway. Montoyas merges with Buckman Road and Paseo de las Vistas to become Camino de las Crucitas at the dog park and you are back in town again.

Lots of loops and options once you know the area. I have to explore these. A visitor at one of our downtown hotels could start and finish near the plaza and have the same route. 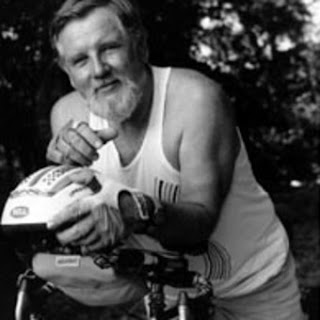 Back around 2005, I took the League of American Bicyclists League Cycling Instructor class and became a newly minted LCI. The rider/coaches were Preston Tyree and Fred Meredith. Today I assisted with this weekend's LCI training class in Santa Fe, where one of the Houston based rider/coaches informed me that a couple weeks ago, Fred passed away. The obituary is here.

Fred was, in addition to a gifted teacher, a great all around guy who was active in the League's governance, as you can read in the obit. That was in addition to all the other stuff he did. Back over a decade ago Fred's graciousness in governance came in handy when I got into a verbal brawl with a former LAB board member. One can guess what happens when two opinionated, ego-driven males get into "mansplaining" things to each other over e-mail, a medium which can be easily misused even on a good day. Fred interceded and saved me from what probably would have been a mutually acrimonious divorce from the LAB.

The world will miss the Fred Merediths. We could all learn a thing about teaching, listening, learning, and being a good citizen from folks like Fred. So when you are on your bike this weekend, catch a wheel in the shadow of that rider who is now riding up in the heavens.

Click to enlarge if you can't read it.
Posted by Khal at 3:11 PM No comments:

Get Gates Belt Drive, Comrades. You Have Nothing to Lose But Your Chains

And Happy May Day to All!