On June 7th-8th, Its Bike Weekend in Los Alamos 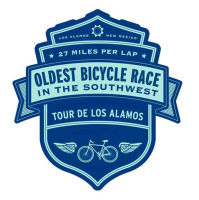 The 2014 edition of the Tour de Los Alamos is the 42nd consecutive running of the Southwest's oldest bicycle race, and will be held Sunday, June 8. Registration can be done on-line by clicking here.  That Daily Post story is here.

The Tuff Riders, our local IMBA affiliate, will be holding a bike and gear swap at the Los Alamos Co-Op on Saturday, June 7th from 9 a.m. to 1 p.m. Details are here.

While you are at it, you can just ride your bike next weekend as well!
Posted by Khal at 11:33 AM No comments:

Not much happened in BombTown for BikeWeek. The usual suspects rode to work. Maybe a few new riders, but not a torrent. A whole lot of people did not ride bikes. So it goes, as Kurt Vonnegut would say. If we want a showtime event, someone has to do the hard work.

I thought about cycling as I did an enhanced Bandelier Loop (i.e., add a bunch of little loops through Pajarito Acres and White Rock) this morning. Some standout rides.

1. Favorite commute to work: From Kalama Valley to the University of Hawaii, via the Ka Iwi Coast on Kalanianaole Highway. No ka oi. See photo and weep. Distant second place: Port Jeff Station to SUNY Stony Brook via Sheep Pasture Road.
2. Favorite Century Ride: Red River Century, followed closely by the Honolulu Century. Red River for its rural beauty, rugged landscape, and mondo climbs. Honolulu Century, well, because Oahu is simply gorgeous. Ride along the Ka Iwi Coast, Makapuu Lookout, and then the sheer cliffs of the Windward side. Sigh....

3. Favorite Long Ride (roughly 60-70 miles): First place, Stony Brook, Long Island out to Mattituck and back along the North Shore back in the eighties. Back then, this was along a lot of quiet north coast roads, with a good mix of evil-steep short climbs where the roads traveled the Harbor Hill Moraine and long spins when it did not.  Second place: Windward Oahu, any start and finish, as long as you stop at the Hygienic Store for apple bananas--eat one now and put a couple in the jersey pocket. Third place: BombTown to LaCueva, before the Las Conchas fire. Now that ride just makes me sad, even though it is still beautiful. I wish the dang state DOT had not chipsealed all of NM4. Had to replace most of my tires with wider, softer ones or replace a bunch of fillings. 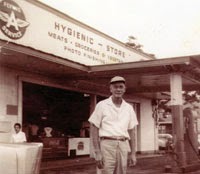 Something related.  Richard Alley of Penn State geosciences discussing climatology at a 2013 American Geophysical Union Chapman Conference on Communicating Climate Science: A Historic Look to the Future. Watch this and go ride your bike to work. I think a whole bunch of the Chapman talks are on this page.

Bike to Work Week is Upon Us

Given it is Bike to Work Week (or as Ian Brett Cooper calls it, "Motorist Bike To Work Week"), a few more folks might be riding to the Laboratory or elsewhere around town. A couple caveats:

Riders should maintain their situational awareness at all times, but especially when in areas in and around intersections and driveway access points. I would guess that the most hazardous stretch of road for people cycling to LANL is the Diamond Drive bike lane between the Orange/Sandia intersection and West Road, where there are ten intersections or curb cuts, inclusive of those two streets. Each of those is a potential conflict point and there have been a few crashes and a number of near misses there, most of which were caused by motorists overtaking and turning in front of a cyclist in the bike lane, the so called “right hook”. One such crash put a cyclist in the hospital. Watch traffic around you and plan a strategy if an actual conflict situation arises. That strategy can include safely moving out of the bike lane. If you are the motorist, keep an eye out for cyclists in the bike lanes to your right and yield to them before turning across a bike lane.

You won’t learn everything from a booklet or video, but John Allen’s Street Smarts is a good place to start, and is available online. Some good videos on the LAB site too.

Biking to work can be a refreshing, healthy alternative to the daily drive, but does require some skills and awareness when riding in traffic. Don't get lulled into complacency by paint stripes or promises of "safe facilities". Safety is largely determined by that grey stuff between the earlobes. On that note, I saw one rider ride diagonally across the Diamond/Jemez intersection this morning, hopping off the curve against the light and signalling motorists to let her through. Also this morning, my team leader was almost hit by a bicyclist when walking across the Omega Bridge on the sidepath.

Its supposed to be bike to work, not bike to your doom, knuckleheads!
Posted by Khal at 9:10 AM No comments:

I just accidentally did a global delete of comments when I meant to delete selected spam comments. No intentional global delete, and sorry about that. I can't find a way to restore them, either.
Posted by Khal at 6:42 AM 1 comment: