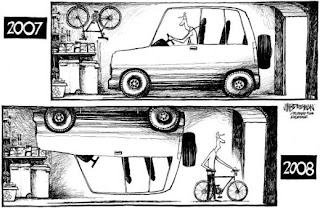 From National Public Radio: Rising Gas Prices Could Put Sting On Summer  February 19, 2012
The national average for unleaded gas has risen to $3.50 a gallon only three times in history. This year's rise to that threshold is the earliest ever, and the Department of Energy suggests that prices could near $5 a gallon by the start of the summer driving season. Weekend Edition Sunday host Rachel Martin talks with Phil Flynn of the futures brokerage PFGBEST.

Well, aside from noting that the $3.50 number should be looked at in an inflation-adjusted context, that is a worthy admonition to Americans. Think ahead.

As I've said before, we don't know what the future will bring in terms of energy costs. Energy is a global commodity and the state of the world economy is as unpredictable as predicting who will make the next major gaffe in the Republican Presidential Primary. So let's make sure folks have reasonable options that can share the spotlight with Old Belchfire. Keep yer options open. Save the gas money for vacation. Ride yer bike to work or the store. 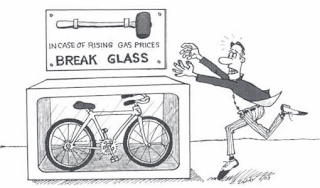 Note later in passing: Steve Avery (see comments) is right: gasoline is pretty cheap energy on a dollar per calorie basis; a lot cheaper than pasta and a lot cheaper than gas is in Europe due to punitive taxation. And as both Steve and Cliff Slater have intimated or said, all forms of commuting have their costs. One is we value our time: bicycling longer distances can eat up time. Unless one is poor or responding to other drivers (i.e. lack of parking, closeness of destinations such as on a college campus) the choice to bicycle is often not made on economic terms but rather lifestyle choice. Or, as in Honolulu, traffic was so bad there really wasn't a time penalty for my choice to bike to work. I had a hot shower waiting for me when I got to work, though, so I could hammer the eleven miles to the University, making as much or more forward progress as motorists.

Separately from all that, gasoline and crude oil are extremely energy dense liquids but they are after all non-renewable resources.  Americans tend to think of two buck a gallon gas as a birthright but in a world market increasingly shared with other major industrial economies, the remaining oil in the world (as well as non-traditional fossil fuel liquids) will be up for bids. For those out there who say "drill baby drill", lets not forget the ancillary costs of drilling. Its not every day we soak the Gulf Coast in oil. Not to mention, even offshore oil fields have limits as well as risks.  Harder to get energy (deep drilling, secondary recovery, etc) will only be exploited as prices rise, so there is, Newt Gingrich's assertions not withstanding, no free lunch in capitalism. Keeping one's options open as far as transportation makes transportation sense (I'll pass on the health and environmental bennies for now).
Posted by Khal at 12:01 PM

Gas prices this high are very likely as the oil industry will try to do whatever it can to help Americans have an unfavorable view of our sitting president by the November elections.

With $5/gal gas prices, we Los Alamosians should also look forward to a variety of changes to grocery shelves—most likely a wholesale switchover to cheaper (but more profitable) Kroger-brand foods and Private Select brand-name items. Higher gasoline prices and the Kroger monopoly here means that our one and only food supplier can start to play supply-side games to manipulate pricing and alter brand loyalty among us peasants.

I'll be commuting by bike a lot more to save gas money for weekly trips to Santa Fe for food shopping. Anyone interested in forming an off-the-Hill-food-shopping can contact me.

Between the oil industry and Iranian nuclear follies, I expect higher oil prices aka 1979.

We think Krogers may already be replacing some name brands with in-house (Kroger, Private Select) brands, based on our shopping experience. I am hoping, as an eternal optimist, that Kroger will bring in more good stuff, aka Wegman's on the East Coast, with their impending superstore in Trinity Place. But Wegmans has competitors. The co-op is another option albeit its a small store and not really competition for Krogerville.

If gas goes to five bucks and you are right about Krogers tightening the screws, I'll take you up on the offer, Jim. Assuming we can all fit us and our victuals in one vehicle! But given this is Bombtown, I would suspect they know we can afford to flee, five bucks or not, if they provide lousy choices. Even at five bucks a pop, I suspect many will vote with their feet, i.e., gas pedal.

We should not forget that gasoline becomes more expensive than McDonalds on a $/energy basis somewhere upwards of $50 per gallon. Double that for the energy content from oil in the Big Mac. $5 per gallon is still dirt cheap.

On a dollars per energy basis, you are right, Steve. Gasoline wins the dollars per energy budget by an order of magnitude vs, say, pasta. We can thank millions of years of work by Mother Earth on all those cooked forams for that price point...my point being gasoline is not a renewable resource, at least on the time scale of human events.

But on a dollars of energy per mile basis, bikes are still about 2.7 times more energy efficient than a car since a car is so much bigger to haul about. Assuming of course I did the math right. I did it for a pasta source at three dollars a pound vs. a gasoline source at five bucks a gallon and a moderate intensity cyclist using 50 kcal per mile** vs a car getting 25 mpg.

The McBurger might make it a wash or run the other way. But how many bicyclists run on McBurgers?

** Readers should note that most publications report energy per mile for bicyclists in food calories, since they are referencing how much we eat. Food calories are actually kilocalories if you want to convert them to the same units that gasoline is usually reported.

I saved the spreadsheet, in case anyone comes up with massively different results.

For more than you ever wanted to know, go to my blog and pick the "bicycle operating costs" label. One of my own favorites used gas at $10 per gallon to illustrate why even that price is really cheap. Somewhere, I calculated a break even at $39 per gallon but I think that included the oil used to grow the food and can't find it at the moment. If you want to travel cheaply by bike, either fuel yourself with leftover cooking oil or use your tank reserves.

The $10 gas example is at: http://dfwptp.blogspot.com/2010/11/high-gasoline-prices-and-bike-commuting.html

Bike: 25 min. to just about anywhere in downtown LA.

Car: Shuttle bus is unreliable, so the walk to the car is 20 min typically. You figure out the rest!