New Mexico State Police to cyclists: get off the road or die

"There's an important message for bicyclists here," Garcia said. "It is recommended that bicyclists visit their local bike stores for brochures and information on recommended routes of travel, instead of riding on open roadways."
--State Police Lt. Eric Garcia, quoted in the Las Cruces Sun, after a cyclist is struck and killed on US 70 in Las Cruces


Details about the crash are coming in and we don't know what really happened, but the quote above (boldfaced below in the Las Cruces Sun article)  is beneath contempt. After all, in most parts of New Mexico, thar just ain't no options other than the "open road". Cyclists would also note that US 70 is posted as State Bike Route 7, and that the crash occured at milepost 165, not 156 and that the speed limit is 65. Of course, take a look at these Facebook pictures of the crash site, two of which I have posted below. As usual, the NM-DOT's shoulder treatment on this 65 mph "bike route" is practically criminal. 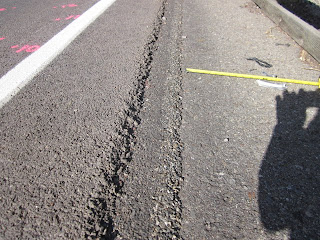 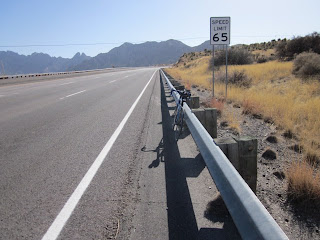 I posted my thoughts to the Las Cruces Sun; these are appended at the end of this post.

Meanwhile, State Police spokesperson and Lt. Eric Garcia has not been a friend of law-abiding roadway cyclists. Does he speak for the whole force? Have New Mexico cyclists lost their roadway rights (as stated in state law), even on state bike routes, on the whim of a State Police Lieutenant (or more likely, his boss)? Where do we take our complaint with Lt. Garcia and his superiors when they, seeming under color of authority, say that they can make up any interpretation of law they wish, i.e., that a bicyclist is in violation of 66-3-705(c) simply by riding a bike such that motorists have to overtake? There is precedent to the contrary, i.e., Selz vs. Trotwood, Ohio.

A far more useful statement from the NMSP might have explained, to the best of the State Police's knowledge, what went wrong so we could construct a lessons learned from this fatality. Nothing is completely safe, and that includes traffic. We can only make traffic safer if we understand its failures, and ours, and correct them.

Sun-News report
Posted: 03/06/2011 07:44:04 PM MST
LAS CRUCES — A bicyclist was killed this afternoon after being struck by a pickup truck traveling westbound on U.S. Highway 70, according to a New Mexico State Police spokesman. Ronald Fronczek, 63, was traveling uphill and westbound in the far right-hand lane of traffic when the small pickup struck him from behind about 4 p.m. Sunday, said State Police Lt. Eric Garcia. Fronczek was pronounced dead on the scene, having suffered "heavy bodily injury," he said.
The fatal collision occurred on U.S. Highway 70 near milepost 156, where there are three lanes of westbound traffic and the posted speed limit is 70 miles per hour, Garcia said.
"The bicyclist was riding in the roadway and the motorist didn't see him," he added. "State Police currently have no intention of citing the driver."
The driver of the pickup, Larry Houck, 42, and his teenage son, who was riding in the passenger seat at the time of the collision, were treated for minor injuries at the scene, Garcia said.
"There's an important message for bicyclists here," Garcia said. "It is recommended that bicyclists visit their local bike stores for brochures and information on recommended routes of travel, instead of riding on open roadways."
On the New Mexico Department of Transportation's Las Cruces bike map, U.S. Highway 70 is designated "heavy traffic with shoulder."


“This may have been truly a tragedy--sun in the eyes, wind, possibly dust. Or, it might have been preventable. Seems most of us don't know yet. Maybe the only person who really knows is the pickup driver, Larry Houck, a law enforcement official at White Sands Missile Range. I'm truly sorry for all involved but especially for Dr. Fronczek, his family, colleagues, and patients.
What we do know is the casual comment of State Police spokersperson, Lt. Eric Garcia, doesn't really help. Fact is, in most of New Mexico, we cyclists have few roads from which to choose between. We need to ride safely and legally on the ones that are there and motorists need to drive safely as well. Accidents will still happen but hopefully be rare and we can eliminate those caused by simple carelessness, drunkenness, or through traffic code violations.
As far as Lt. Garcia and his superiors? The police don't write laws or decide for themselves which to enforce, i.e., where we can ride.  They enforce the laws and regulations made by those who have the power to make law and regulation, i.e., the State Legislature and New Mexico Dept. of Transportation. As a long time cyclist, a League of American Bicyclists Safety Instructor, former Bicycle Coalition of NM Board member, and a nearly ten-year duration policy advisor in my community who has worked with my own Police Department and County council, I have to pick a bone with Lt. Garcia for his callous statements made both now and in the past.
It is certainly more than justified for police to advise cyclists to use extra caution on high speed roads. I have done as much, working with the Los Alamos Police Dept. It is quite another thing to tell cyclists to get off the road, especially right after someone was killed and others are feeling rattled. This isn't the time to be so dismissive and in being so dismissive, it calls into question whether the State Police take the protection of cyclists seriously.
Lets grieve for this latest unnecessary death together and then go out and make New Mexico a safer place for all of us. Believe me, it will take all of our efforts.”
Posted by Khal at 11:08 AM

That a motorist gets a pass for not seeing something (in this case, someone!) in front of him is simply abdicating responsibility which the motorist accepted when he signed his driver's license. It is nothing shy of criminal on the part of the police department.

"But officer, I was just foolin' around with my .45 when it went off. The round went through a neighbor's window and killed him, but it's not my fault!"

"You're right. You never saw the guy so there's no crime. Be on your way, sir."

I thought the legislature made the laws and that it is the job of the police to enforce those laws, including ones that require road users to exercise due care when overtaking others - including cyclists and police officers.

Essentially in this country it's perfectly acceptable to murder a cyclist. It sounds harsh, but if you look at the sentences handed down, it's the sad truth.

Nancy Grace and shows like hers will spend months dissecting murders of toddlers, but the murder of a cyclist barely rates the A section of the newspaper.

In the old days in Texas it used to be okay to punch a negro in the mouth as long as you paid a small fine. These days it's okay to maim or kill a cyclist as long as you pay a modest fine. The comparison shows where cyclists rate in the social strata. We are the modern N****rs. Better get used to it.

Just saw a story on Channel 7 that police are enforcing a law that prohibits bicyclists on Tramway in Albuquerque? Enforcement started this week, and its got the regular bike riders on that road up in arms. This is maybe the most popular bike route in the city, along with the Bosque trail.

What's behind this? Do you know what law they're talking about? Everything I read here says bikes should be allowed on that road, only Interstates and a few other limited-access highways legally prohibit bicycles. Is Tramway really limited access by that definition?

I searched and found little coverage of this on the ABQ bike blogs. Apparently, there's a meeting in ABQ next week in which the city council will consider amending the law to allow bikes on Tramway. Basically, WTF? Do we need to write/phone/e-mail who about this?

There is confusion about Tramway in that it is listed as a limited access highway. That's been a topic on the BikeABQ e-list. Some details below clipped out of an email, but it is being worked on by the City to make sure cyclists have access.

We did know that under City ordinance, it meets the definition of "controlled access," as do Coors and Unser. Tramway (the east-west portion) is identified as a bikeway / road with wide shoulder on the City's Bike Map, and Coors and Unser both have bike lanes - all in conflict with § 8-3-3-6.
>
>
>
Councilor Benton is looking into an amendment to the code that would
delete "or controlled access streets" from the end of the first
> sentence in the following in order to correct the conflict:
>
>
>
> § 8-3-3-6 RIDING ON PROHIBITED STREETS OR CONTROLLED ACCESS
> ROADWAYS.
>
> No person shall ride a bicycle either on any street or path where signs have been erected by the Mayor or his designated representative which prohibit the use of the street or path to bicycles, which restrict the use of the street or path to modes of transportation other than bicycles, or on controlled access streets. Notwithstanding this provision, drivers of vehicles using such streets or controlled access roadways are not relieved of responsibility of using due care.

Thanks for the extra info on Tramway. And thanks for posting your comments regarding the Las Cruces tragedy. Very well stated.

i'd have more sympathy if more bicyclists adhered to the rules of the road more often. if i hit you with my car i am not the one that's getting splattered.

Check out the Outside article I just linked to, Anon.

So, bicyclists are to only be respected if they obey more of the rules of the road?
Where does that leave the huge percentage of motor vehicle drivers who observe VERY FEW of the rules of the road, including speed limits, stop signs and lights, etc, etc.?
And why doesn't the pickup driver need explanation for WHY he "didn't see the cyclist"? Was he texting, looking at the dashboard fiddling with something distracting, or ??? How is "not seeing something" a legit excuse? I was taught way back in Driver's Ed that the driver of a vehicle has the RESPONSIBILITY to watch for things in front of him, and running into someone was ALWAYS your fault since you are supposed to be awake and aware and use those @##?%%! brakes when needed.

christania’s “cykeludlejning” bikes are rolling across the city. The system, less than a year old, is funded by christania’s municipal government. It is currently only in one of christania’s 22 administrative districts. Although a 2nd generation system, there are 12 “Houses” in this district, each with around 40 bikes. The yearly subscription cost is the equivalent of $2 US, and allows the use of a bike for up to four hours at a time. In less than a year, there have been 6,000 subscriptions sold. There are larger 3rd generation systems in the world, which do not have a subscription to bike ratio as big as that.